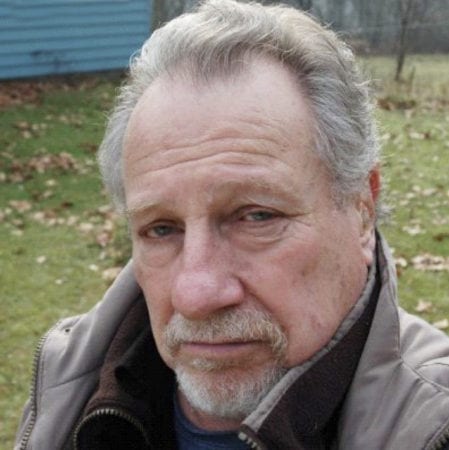 Shelly Rusten is a music loving photo jounalist / poet that began taking photographs in the 1960’s .  The photograph of the historic crowd of 400 Thousand plus was  licensed to Warner Bros for use on their ads and posters for the movie. Plastered on every wall and bus from NYC to Rangoon for over ten years it was one of the most widely seen photograph back in the day.

Shelly reflects on WOODSTOCK: The way things were set up, you could only get so close to the stars. The one exception was Janis. She was so close I could smell the Southern Comfort coming off her sweat. Her singing was so fierce, I dared not get any closer lest she might have kicked me in the Face!

Ah, the Good Old Days… We were SO FREE Back then!  Woodstock was really a Celebration of that. 400 thousand hippies smoking pot with abandon. There was a LOT of that on the stage as well. Photographers were all passing it around. One would pass you some good pot and another dude on the other side would say “F**k that s**t, try this” while there was another one on the other side offering hash, etc. etc. etc.
Canned Heat came on in the afternoon on a hot day. They were thumping so hard on the stage that it was shaking! With that shaking and all the pot (and oh yes some blow too) I was SO stoned! These folks in the audience kept pulling on the fence in back of us, trying to tear it down. I thought I was gonna die!  I had to get off the stage for a bit. I went around back to lay on the grass to Chill Out.
more on Rusty go to his website  www.shellyrusten.com

AS Everyone who knows Me IS AWARE and relative to Woodstock especially there are a LOT of same because I was the dude who did the Most Famous Picture of the CROWD looking Right in the Faces of all 400 Thousand of them shot from the vantage point of the Center of the Stage. For the interest of those who were not aware of this I’ll fill you in on HOW I came to Photograph the Festival cause it’s a Great 60s story. I was a Jazz Drummer before I got more seriously into Photography as Art in the 60s and SO Jazz being MY music I wasn’t planning on Covering the Festival initially. But then one day I was checking out the Village Voice just before the Festival was to start and as I tell it like out of a Movie I felt some kind of Power URGING me to Attend. So I called my Agent and asked her if she wanted me to go to which she replied “OH YEAH, PLEASE DO and if you can get a Press Pass I’ll gladly pay for your Film and Processing.” I lived in the East Village back then and I was friendly with this dude who had established a Rival Paper to the Voice called ‘The East Village Other’. So I gave him a call to see if he wanted me to go and he responded just like my Agent “OH YEAH SHELLY, get your Butt over here right Now and I’ll give you the Pass.” As I go on to tell this It was indeed quite Magical and it didn’t stop there either, I got on the Bus like all the rest of the folks heading for Woodstock and I was dressed in East Village style like always, Genes and a T Shirt and Levi Jacket. When I arrived I went right over to the Stage where I found these dudes in charge of monitoring who would be allowed on and they were Holding Up the Establishment Photographers behind a Rope and as they informed these peep “You’ll all have to wait until the More Important People show Up.” To my DELIGHT needless to say one of the photographers they were waiting for was ME and when they saw my East Village Other Press Pass they said “HEY BROTHER, where you been, we’ve been Waiting for YOU” and with that they escorted me on to the Center of the Stage and told me “This is YOUR Spot Brother, we’ll let those other folks in soon but if they give you any shit let us know and we’ll throw them Out.” Ha Ha, they were giving the Establishment the FINGER do you see! So there I was on the Stage Photographing the Stars but also roaming around the Crowd below making pics of them as well of course. There’s SO MUCH MORE I could tell you about that Incredible Experience but to Cut to the Chase about MY Attendance it turned out that I was the Dude who made the Most Important Photograph of the Crowd as promoted via the auspices of Warner Bros. Having been involved with Photography for some time by then I was Savvy of the Drill and so I left before Jimmy Hendrix Set on Sunday cause I KNEW I had to beat everyone to the City Monday Morning to place My Pictures with the Magazines and News Papers. There were a Lot of Photographers running around likewise in the city trying to place Pictures and one I ran into said to me “Hey Shelly, you got to get over to Warner Bros cause they’re doing a Movie of the Festival and they need Pictures.” So I did so and I was sitting with this Woman from California who was charged with gathering Pics and she was looking at mine when a Call came in from their Publicity Department informing her “We Need a Picture of the CROWD All 400 Thousand of them and the Deadline is Yesterday.” To which she replied, “I GOT IT, the Photographer is sitting in front of me RIGHT NOW and he has Exactly what you Want!” And the Rest is History, I made a Deal with Warners to License them for One Time Use of my Picture of the Crowd and they produced a Large Poster of it that was Plastered on Every Wall and Bus from NY to Rangoon for over Ten Years Running making it without a doubt the Most Widely Seen Photograph of ALL TIME! I made some Good Bucks to say the least (And as I say being Savvy of the Biz I made a point to get the Pic Copyrighted before I did the Deal to protect my Right to do whatever I wanted to do with it and as Everybody knows about that also I produced my Own Posters of the Pic minus the Warner’s Logo as Agreed upon. )

TRUE STORY FOLKS, REAL LIFE can Be More Profound than Any Movie when the FORCE IS WITH YOU as It was for ME at WOODSTOCK. As I say I made a LOT of Bucks and in addition this Put Me on the Map as Photographer and I got even more Work than before including doing an Exclusive for the TIMES Magazine of my Pics of Children and this also resulted in me being accorded the opportunity to do the Pics for their Ads that many of you may recall “Got My Job at the NY Times” and “The NY Times is Sell On Wheels” a Car Add. HOWEVER, I didn’t get into Photography to do Commercial work but ART and so soon after I walked away from the Commercial scene to Teach first at the New School and then the School of Visual Art and that allowed me to purchase my little Mini Estate in the Catskills and not long after that I attained the PRIZE I had coveted from the Start that was my Acceptance to the MOMA Collection and if that wasn’t enough I was also accorded the LARGEST Grant ever given to an ARTIST Photographer by the NYS Council on the Arts via their now defunct ‘Supported Work’ program.

HEY they could make a Movie of my Incredible Life and I’ve been URGED by a whole lot of people who know and Love me to Write a Book. Don’t know that I’ll do that or Not but it certainly is Very Gratifying to have such Acclaim as Reward for being a Dedicated ARTIST Full Caps, I DID IT MY WAY suffice it to say and I Refused to Cop Out to the Games others Play on the Art Scene. My Photographs remain Available to anyone who Loves ART enough to Want to Showcase them and Right Now I have some of my Wonderful Large Format Italian Pictures which was one of my last projects showing at Johanna Spoerri’s Gallery 35 in Callicoon. Their Open on Weekends so Have a Look and if you Love them as I’m sure you Will I would indeed be amenable to doing a Show at either the DVAA or Catskill Art Society or Both BUT DON’T even Think of asking me to Submit to your Jive Juries cause I ain’t no Hapless Wannabe and you’d just be Putting Yourself DOWN. Don’t Claim to Love ART if you’re Not Willing to Accord Long Time Serious Artists in your Midst their RESPECTFUL DUE!