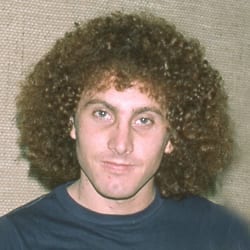 Ron Sobol started taking photos and 8mm movies as a teenager.  His love of rock music and photography went hand in hand as he started taking photos and films of the concerts he went to. In 1975 Ron met Randy Rhoads through his friendship with Kevin DuBrow when Kevin started Quiet Riot with Randy.  Ron became the band’s photographer and lighting designer.  Ron’s unfettered access to all things Quiet Riot gave him opportunities to shoot many unique photos of Randy Rhoads. Ron’s work with Quiet Riot lead to Ron working as a freelance photographer with his main focus on shooting musical groups and musicians for various Japanese Magazines.  During this time he was instrumental in helping  Quiet Riot go from local sensation to worldwide success as their photographer, co-song writer and lighting designer.  In 2011 Ron started Red Match Productions.  The purpose of Red Match Productions was to produce a book and dvd entitled Randy Rhoads the Quiet Riot Years.  This  product is a 90 minute documentary and 200 page coffee table book about the early years of Quiet Riot.  Red Match Productions is still in operation.